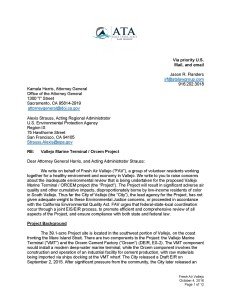 On morning of October 4, 2016, Fresh Air Vallejo’s lawyer sent a letter on our behalf to the Attorney General and the Acting Director of the EPA demanding a recirculation of the DEIR. This means going back to square one for development of a new draft environmental impact report.  This is our right under CEQA law since the VMT/Orcem project applicant has stated in newspaper and television interviews and City of Vallejo posted to the City website that there are “significant changes to the proposed project.”

The Attorney General’s Office employs the California Environmental Quality Act (CEQA) and related laws to ensure that local governments take seriously their obligation to consider potential environmental impacts, especially those that may affect the public health and welfare.

FAV’s lawyer received a quick confirmation back from the EPA and we are waiting to see how they and the Attorney General respond. Copies of this October 4th letter also went to Vallejo City Council, City Staff, Planning Commission, and many of the agencies FAV has been working with over the last year.

Thanks to the many volunteers who made this possible. And thanks go out to all of you in our community for your continued support.