The nagging question of fairness 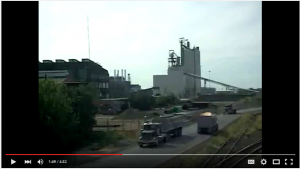 Camden, NJ – 600 Truck Trips a Day with Cement Plant in the Background

We keep hearing that turning down the VMT/Orcem waterfront terminal and slag cement plant project would somehow be unfair to the applicants, or give Vallejo a reputation as unfriendly to business.

What’s fair about locating heavy industry in residential neighborhoods — polluting their air and filling their streets with a daily steady stream of heavy diesel truck traffic? Those homes, apartments, and schools were there long before this proposal surfaced.

What’s fair about the city giving the applicants an $8 million gift in the form of rent credits? How about approving a lease that would allow waterfront development and the demolition of historic structures with no environmental review, while citing a CEQA exemption for something totally different? What’s fair about selling the project as a break bulk cargo port that would fuel an economic boom, when that cargo category has disappeared from Bay area port reporting as something even worth tracking? The Bay Area already carries significant unused port capacity; and the south Vallejo site is not even designated for port use under the Bay Plan as pointed out to the applicants by the BCDC staff.

The project has been rejected on its merits by the city staff and paid consultants who have been immersed in the details of the environmental review for years. The permits were denied by the planning commission following the staff recommendation after a public hearing. The residents who participated in the years-long process to update Vallejo’s general plan to guide future development voted for a very different kind of waterfront development, and a zoning change that would prohibit heavy industry on the site. The only reason this project is still under consideration on appeal is the deep pockets of the applicants and four members of the city council who relied in part on campaign contributions from the applicants and their allies to get into office. Is it fair that three of these council members, who colluded in secret with the applicants on a private ad hoc committee and enthusiastically endorsed the project before the environmental review, would now refuse to recuse themselves from voting on the appeal?

We’ve heard how terribly unfair it would be to the applicants not to complete a final Environmental Impact Report. Unfair is squandering even more scarce city resources on this boondoggle. Once it becomes apparent during the environmental review that a project is simply not going to be compatible with surrounding land uses, further environmental review becomes a waste of resources and completion of the process is not required under CEQA for that reason. The city staff and professional consultants know far, far more about this project than those pontificating about fairness to the applicants, and they recommended pulling the plug. We should listen to the people who actually know what they’re talking about and who we pay for the benefit of their informed and expert advice.

The “unfriendly to business” argument blindly assumes that all businesses are equally desirable, and if we don’t approve every project that comes along, then no business would want to locate in Vallejo. Again, really? Why spend millions on a general plan update process to develop a vision of the kind of development residents want for our waterfront, if we’re only going to throw it out the window because a few well-connected individuals managed to pick up prime waterfront property dirt cheap during the financial crisis? In fact all businesses are not equally desirable. Some cost more than they’re worth and lead to more of the wrong kind of development.

There is no good reason at all to believe in fantastic stories of some kind of economic renaissance fueled by adding a port or a cement plant. That’s a development model better suited to the middle of the last century. Nor will the applicant’s wildly optimistic economic analysis factor in all the hidden costs like road damage from all the heavy truck traffic or the increased health care costs resulting from living with the pollution documented in the EIR.

It is typically lower-income and minority neighborhoods that bear the cost of hosting heavy industry. If this project were proposed for a site just upwind of Hiddenbrooke instead — with trains that would regularly block their traffic and hundreds of heavy diesel trucks using their neighborhood streets daily to get to the site and then back to the freeways — do you honestly think we’d still be talking about VMT/Orcem? How fair is that? The applicants have received more than fair treatment and a thorough examination of the impacts – they just came with a bad project that can’t be made compatible with any amount of tweaking. It’s the residents of Vallejo who now deserve fair treatment in this process.