How Much Rent is VMT/Orcem paying? Be Prepared to be Surprised!

With all the waterfront acreage VMT is leasing from our city, how much do you think they have to pay?

Their current lease will allow them to pay as little as $1400/month if the project moves forward!! That’s about the rent for a small apartment in Vallejo?

We started looking into this because this deal is too good to be true!! It’s the kind of sweetheart deal that all of us dream of.

Read on to see how this all came about:

Some things refuse to die, and like zombies, through voodoo or witchcraft, keep coming back to life long after they should. Just like the old lease between General Mills, Inc. (GMI) and the City of Vallejo (COV), which somehow, out of the public view, keeps coming back to life over and over again.

The Old Sperry Mill was last operated by GMI as a flour mill, sitting on property, some of which was owned by them, as well as land Held in Public Trust by the State and COV-owned land.

Most of the historic Mill buildings stand on State land leased through the COV. A ground lease was executed between GMI and the COV acting as Trustee for the public land, on May 1, 1991, backdated to start January 1, 1989, to run for 25 years (until 2014), with an option to renew for another 25 years (to 2039).

GMI ceased operations in 2001 and abandoned the site in 2004. They defaulted on the terms of their lease agreement, which should have terminated their lease according to California Civil Code.

Three years later (February 27, 2007), a Memorandum concerning the GMI Lease was executed between GMI and the COV. This was the first resurrection of our zombie lease. Two months later, the reasons became obvious.

On May 30, 2007, the lease was assigned from General Mills to Cherokee Brooks Street Vallejo, LLC, a Delaware based company, with COV approval. The same exact day and time, Cherokee Brooks filed a Deed for the land GMI had owned. Cherokee purchased GMI’s land and took over its lease with visions of a restaurant, waterfront park and lots of homes.

Another thing happened that May 30th, Cherokee Brooks assigned this deed and the Lease to Bank Midwest N.A. for a loan of $7,150,000, using their land and the lease with the COV as collateral for its huge development project. This could only have happened with the COV’s consent. 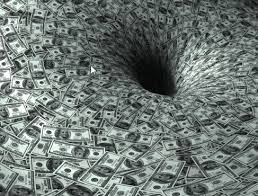 If not entirely orthodox, everything seemed all right until the Recession hit. Cherokee Brooks apparently took the money, but defaulted on the loan before any construction or development had been done. Without providing required notice, the land and Lease were sold at a public auction: December 8 and 9, 2010 for $100,000. The high bidder for both of these was California Cherokee Brooks Return, LLC, a Missouri-based LLC. A month earlier—before the auction had actually happened—Bank Midwest had already assigned the Deed to this Cherokee Brooks, indicating that this company had been pre-selected to be the one and only bidder: a material violation of foreclosure laws.

Two different LLCs, incorporated in different states, with different members, and strikingly similar names represented the old and new owners of the property and lease. By law, the foreclosure should have killed the lease too. But this is a zombie lease, and it had already emerged again.

No one seems to know what actually happened to the $7 million.

Nearly two years later, September 28. 2012, the new Cherokee Brooks cashed in and sold its land. COV Staff once again assigned the old GMI Lease, this time to the Vallejo Marine Terminal, LLC (VMT). This time the COV Staff included a “categorical exemption” indicating VMT intended to use the property similarly to how GMI used it, so it would not require CEQA procedures. The exact wording calls for “Operation, repair, maintenance, or minor alteration of existing structures of facilities, not expanding existing use.”

Mind you, VMT was agreeing to operate something similar to the old flour mill, not Cherokee Brooks’ big project.

The COV filed its “Consent” for this. But oddly, the consent was for Cherokee Brooks Street Return Vallejo, LLC, a third “Cherokee Brooks” company, not otherwise involved: a probable mistake that nonetheless calls the lease assignment into question.

At the same time, they issued a First Amendment, which started changing substantial terms. It changed from 25 years to 33 years, with an option to renew for another 33 years, showing the COV’s firm commitment to the extended lease. The Amendment contradicted the “categorical exemption” in the Lease and allowed “Other Alterations” including demolition, removal or replacement of any existing building on the leased land.

While a categorical exemption is considered “No Project” under CEQA, the COV was agreeing to a “Project” involving demolition, which requires an Environmental Impact Report. That EIR wasn’t started until 3 years later. 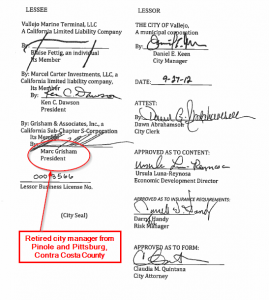 This Amendment also allowed for “abatement of rent” through June 2015 and a “Capital Improvement Offset” against 85% of the base annual rent of $95,520. The offset is for a maximum of $8 million over the term of the lease, meaning most of the rent could be offset for more than 98 years—longer than the lease—and their rent could be as little as $14,328 a year (a little less than $1,200 a month). The Amendment also allowed VMT to sublease the property for up to 10 years.

On Sept. 5, 2013, a year after getting the Lease and First Amendment, VMT and the ORCEM cement company jointly applied for a building permit: the first time ORCEM’s name appears publicly. Other documents reveal that VMT already had an agreement for ORCEM to sublease the property.

On June 9, 2014 a Second Amendment was signed as a “minor administrative amendment,” not requiring City Council approval. It allowed VMT to subdivide the land and sublease the subdivided land.

Subdivision hadn’t been allowed by the First Amendment, but a sublease for up to 10 years was allowed without COV approval. The Amendment indicates the subdivision was exempt from the Subdivision Map Act, citing parts of CA Government Code that deals with subdivision for right-of-way, not leases: an infraction that carries criminal and civil penalties.

ORCEM was publicly acknowledged as a sub-Lessee by a Memorandum on March 10, 2015, stating that its sub-lease with VMT was executed May 23, 2013, almost 2 years earlier, and just eight months after the “zombie lease” was assigned and the First Amendment executed.

The Sub-lease is private and its terms haven’t been revealed yet. But we assume that the COV is not getting paid from that transaction: those arrangements are between ORCEM and VMT.

We question whether the sub-lease is legal, because the agreement doesn’t include any consideration for the use of Public Land. We also find it hard to believe that ORCEM really agreed to a lease of just 10 years, the maximum term allowed by the First Amendment without COV approval.

On Sept. 3, 2015, a Draft Environmental Impact Report (DEIR) was released for public comment.

A few days later, a Third Amendment to the lease was executed extending rent abatement for another year. And for the first time, the California Environmental Quality Act was mentioned. Not in the context that CEQA compliance was required before the whole administrative process, but because VMT agreed that the development and operation would “be in accordance with mitigation measures set forth in the Mitigation Monitoring and Reporting Program as adopted by the Vallejo City Council at the time they approve Tenant’s proposed deep water berth, marine terminal, and cement manufacturing project.”

The DEIR was still in public review. No mitigation measures had been identified, nor were any significant environmental impacts that might be mitigated or avoided. Yet they were agreeing to them all in advance.

If that were intentional, it would be governed by a whole slew of other regulations that weren’t followed.

The old zombie GMI lease has long overstayed its welcome and needs to be buried. Its current, thrice amended form cannot withstand scrutiny or be defended. There seem to be many indications of concession, collusion and cover-up. The City of Vallejo needs to come clean now and cancel this lease. It needs to stop abating non-existent rent. Four years of no rent and numerous CEQA violations have not served the Public Trust and are sufficient grounds to cancel the lease, or the COV risks another lawsuit to overturn it. Let this die once and for all. This manner of doing business in Vallejo has to stop.